Fire safety is not something to take for granted. To say that it is your responsibility as a business owner to ensure active and passive fire protection systems are in place is putting it lightly — it is a legal obligation.

The effects of a fire can be disastrous and life-shattering, an event in which your business may never recover. Moreover, the cost of damages is crippling in itself without accounting for time and business loss.

Consequently, it’s vital for every building to have a fire protection system. In reality, fire protection extends beyond the usual smoke detectors and fire extinguishers.

When it comes to fire safety, there is never a wrong time to be proactive. An active and passive fire protection system work together to contain fire threats. And in order to maximise protection, you need both.

Primarily, heavy industries that must pass regulations and fire protection standards never turn a blind eye on either one. So, learn how to distinguish the different systems below:

An active fire protection system involves a trigger action in response to a fire. The response action can be manual, like hand-operated fire extinguishers, or automatic, like a sprinkler system.

Fundamentally, active fire protection directly combats the fire, whether controlling, overpowering or extinguishing it. Integrating an alarm system in fire protection is equally imperative, and when the alerted fire department arrives, their actions would also be considered active fire suppression.

Some of the active fire protection systems you can use for on-site deployment include:

An active fire protection system is typically installed based on specific criteria, such as building size and occupancy. It is also wise to have more active systems in high-risk places, like anywhere with cooking equipment.

While active systems may be the first line of defence, flames can spread beyond control. Fire demolishes everything in its path, which is why it’s best to include passive fire protection systems.

Meanwhile, a passive fire protection system involves fire resistance measures that often go unnoticed. They are stationary elements built in the building to prevent the spread of fire and resist primary ignition.

The resistance is structural, designed to isolate a fire in its original area and stop it from spreading throughout the building. For example, using fire retardant materials for the floors or walls.

Passive fire protection is beneficial for safeguarding the building’s occupants and preventing elaborate damage. By compartmentalising the building, you can maintain its structural integrity and guarantee safe evacuation.

Additionally, some other examples of passive systems include:

A passive fire protection system is ideally installed throughout the entire building. It’s best to increase passive smoke protection in areas susceptible to smoke and flames, such as elevator shafts and stairwells.

Ultimately, a passive system’s objective is to contain the flame in one area or channel it out of the building. Working in tandem with an active system, passive systems can help you extinguish fires faster, thus ensuring better safety for your people, and minimise damage.

Not sure where to start? Feel free to explore Palcon’s leading fire protection services and solutions tailored to specific industries. 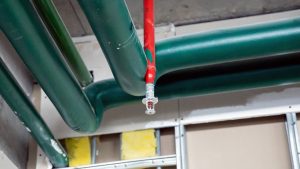 Fire Sprinkler Maintenance in Malaysia: When To Clean Them?

Conducting fire sprinkler maintenance in Malaysia is essential as they are one of a building’s first lines of defence against a fire. Dirt, dust, paint, 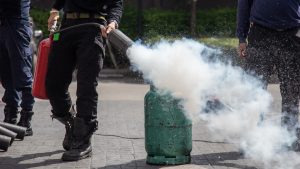 Cleaning Up Fire Extinguisher Residue: All You Need To Know 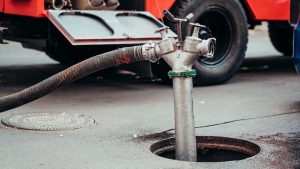 There are two commonly used fire hydrant types in Malaysia: dry barrels and wet barrels. The wet barrel provides a steady flow of water, whereas